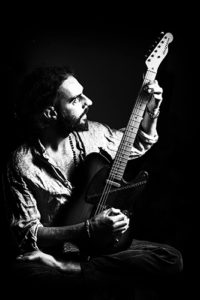 Fascinated with the guitar since early childhood, Francesco approaches music at the age of 6.
Following his father’s advice he begins to study the piano, only to find that between practising on the keyboard and solfeggio exercises , he keeps strumming his father’s guitar, playing “Smoke on the water” in the low E until he meets Gino De Cesare, who shows him how infinite possibilities open up by using all the six strings.

In the following 7 years with his new teacher he embarks upon a journey that explores worlds previously unknown to him. He discovers the spirit of Blues, the rhythm of Funk, the blend of influences of Fusion and he falls in love with the sophisticated melodies of Jazz after watching a mesmerising performance of Joe Pass on video.

Thus he decides to perfect his jazz studies first with the Italian-American musician Agostino Di Giorgio, then with Rocco Zifarelli and Pietro Condorelli.

Later he studies jazz in more depth while participating in seminars in the role of assistant to some of the most influential guitar players, both nationally and internationally acclaimed, such as Kurt Rosenwinkel, Peter Bernstein, Bruce Forman ed Eddy Palermo to mention a few, against the backdrop of the Tuscia jazz Festival and La Spezia jazz Festival .

He plays his first concerts in 1998 , soon collaborating with prominent jazz artist Pippo Matino, a bass player with whom he has become close friends and has actively been working with for over 10 years, as well as with artists like Roberto Schiano,Giulio Martino,Paolo Recchia,Silvia Barba,Peter De Girolamo,Claudio Romano,Pietro Iodice,Fabrizio Fratepietro,Daniele Chiantese,Michele Avella and many others who are well known in the Italian jazz scene.

With this quartet he has the opportunity to play with jazz celebrities Rosario Giuliani,Flavio Boltro,Fabrizio Bosso e Crystal White.

In 2012, his debut album is released under the Roman label “Zone di Musica”,within the Europe jazz quartet project. He co-leads with young musicians Stefano Preziosi e Alessandro Del Signore, while Pier Paolo Pozzi enhances the sound with his expert drumming.

In 2013 “Mantras for a new era”, a record inspired by ancient mantras from the Indian tradition, is released under the same label. As part of the Manipura Project, it features the voice of Anna Maria Manzi and the percussions of Vito Cardellicchio.

In the same year, alongside fellow musicians Nicola Stilo,Lutte Berg, Eddy Palermo,Tony Formichella, Mauro Verrone, Daniele Basirico and Alessandro Marzi he is involved in the production of Maurizio Urbani’s “No Hunting”, released by Rai Trade, He then sets out on a new musical adventure together with drummer Bruno Rizza, with whom he realizes a project called Beyond, and will later be joined by Paolo Innarella whose brass and wind instruments add extra zest to the sound.

From 2011 to 2013 he works as artistic director for the Janula Jazz Festival and for some Jazz Clubs, which gives him the chance to meet high calibre artists like Linley Marthe,Michele Hendricks,James Senese,Marco Zurzolo,Massimo Faraò and many more.

In 2015 Bop Now is born, a bass less trio which aims to retrace the steps of the be bop tradition, adding a contemporary reinterpretation to the style.

In 2015 also he published his first album as a leader, “GANGA’S SPIRIT”, produced with the label “Emme Record Label”. The album is mainly composed original music come to life after a trip across the Indian sub continent.What adds further value to the record , is the excellent musicianship of Francesco Desiato,Stefano Costanzo e Luca Aquino who collaborated on it.

On March 9th 2017 he presents the recording work at the Auditorium Parco della Musica in Rome: JAGGAE; produced by the Roman label “Filibusta Records”, made together with the guitarist Emiliano Candida with the participation of Sonia Lippi, angelo Olivieri and Alberto Maroni Biroldi.

In 2018, always with “Filibusta Records, he released the album WU WAY with the participation of Susanna Boots, Gabriele Coen and Sanjay Kansa Banik.

In 2019 the album LIVE AT STRIKE produced by the label “Cultural Bridge”, and made with the quartet Tawhīd fconstituted by Esharef Alì Mhagag, Paolo Mazziotti and Domenico Benvenuto, is released.

Also in 2019 he collaborates with saxophonist Alberto La Neve on the publication of a new album I Thàlassa Mas (Manitù Records / Concertone), which sees as guests Fabiana Dota, Esharef Alì Mhagag and Jali Babou Saho.

On 21 December 2020, his first EP PREVIEW will be released, produced in collaboration with “Nightingale Studios” and published with the “Italian Way Music” label.

Finally, on March 21, 2022, his latest album My Standards produced by Birdbox Records comes out.